The Western Socialist: The Official Organ of the Socialist Party of Canada

[The Socialist Party of Canada]; A. Shepherd (Managing Editor); James Milne (Ed.); William Child Currey; J.A. McDonald; F.J. McNey; R.C. Walker; et al. The Western Socialist: The Official Organ of the Socialist Party of Canada ; [Non-consecutive Run of Eleven Issues: June, 1936 – March, 1938]. Winnipeg, Manitoba: The Socialist Party of Canada, June, 1936 – March, 1938. First Edition, First Printing. Unpaginated, uniformly numbering twelve (12) pages per issue. 8vo’s., measuring 8.5″ x 11″. Original, twice-stapled, mimeographed self-wrappers. Commencing publication in 1903 in Winnipeg by the Socialist Party of Canada, our offering comprises of eleven, exceedingly rare, early issues of this most elusive early Western-Canadian Socialist periodical. Published in the heart of Canada (Winnipeg, Manitoba), the site of some of the most vociferous early workers’ movements (notably, the Winnipeg General Strike of 1919), and where some of the early socialist and CCF movements germinated, the Western Socialist would serve as an important mouthpiece of this fledgling coalition of workers, activists, and early self-styled “Canadian Socialists”. Printed with the stated objectives of “the establishment of a system of society based upon the common ownership and democratic control of the means and instruments for producing and distributing wealth by and in the interest of society as a whole”, complete with a printed “Declaration of Principles” to the rear covers of all issues. Replete with commentary, news and updates of the International Socialist movement, and the state of Socialism in Canada (notably in British Columbia, and the Prairies) with headings such as: “Another Labor Government”, “The C.C.F. and the League of Nations”, “Why We Study Marx”, “The Fallacy of Reform”, “Why We Oppose Religion”, “Fighting Fascism”, et al. Much critique of capitalism, a selection of Socialist literature (complete with a price-list), world news, humor, and a consistent appeal for their membership to engage politically: “The Socialist Party of Canada, therefore, enters the field of political action determined to wage war against all other political parties, whether alleged labor or avowedly capitalist, and calls upon all members of the working class of this country to support these principles to the end that a speedy termination may be brought to the system which deprives them of the fruits of their labor, and that poverty may give place to comfort, privilege to equality, and slavery to freedom.” Light foxing to the margins of most issues (unaffecting text, or legibility), else, very good+.

Corresponds to OCLC #865191077, indicating only one institutional holding at the University of British Columbia. To be distinguished, though not unrelated, to a similarly titled, but entirely separate publication bearing the same title, though published out of Boston, Massachusetts as a consequence of a later merger with their American counterparts, “The Workers Socialist Party of the United States, later known as the World Socialist Party of the United States (please refer to our listing No. 4458). Our offering comprises of the following issues: Vol. III, Nos. 30, 33-35 (1936); Vol. IV, Nos. 36-38, 41, 45 (1937); Vol. V, Nos. 44, 46 (1938). Unrecorded in Peel, BAC/LAC, University of Manitoba Archives & Special Collections, et al. Rare indeed. (#4457) $1,045.00

Search by author, title, or subject 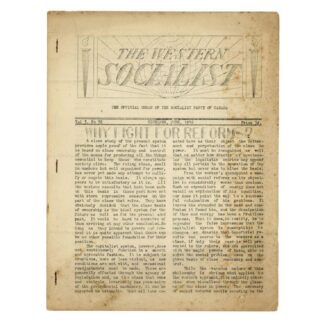 You're viewing: The Western Socialist: The Official Organ of the Socialist Party of Canada $1,045.00
Add to cart
This website uses cookies to ensure you get the best experience on our site. If you continue to use this site, you consent to our use of cookies. Got it
Terms of Sale & Privacy Policy

This website uses cookies to improve your experience while you navigate through the website. Out of these, the cookies that are categorized as necessary are stored on your browser as they are essential for the working of basic functionalities of the website. We also use third-party cookies that help us analyze and understand how you use this website. These cookies will be stored in your browser only with your consent. You also have the option to opt-out of these cookies. But opting out of some of these cookies may affect your browsing experience.
Necessary Always Enabled
Necessary cookies are absolutely essential for the website to function properly. This category only includes cookies that ensures basic functionalities and security features of the website. These cookies do not store any personal information.
Non-necessary
Any cookies that may not be particularly necessary for the website to function and is used specifically to collect user personal data via analytics, ads, other embedded contents are termed as non-necessary cookies. It is mandatory to procure user consent prior to running these cookies on your website.
SAVE & ACCEPT

**COVID-19 Notice** Dear friends, please note that our studio will continue to remain closed to the public until further notice. In the interim, we continue to fulfill all orders placed online. Stay safe and see you all very soon! Dismiss

Brought to you by WisdmLabs: WordPress Development Experts